We use cookies in this website. Read about them in our privacy policy. To disable them, configure your browser properly. If you keep using this website, you are accepting those.
OK
HPTT EUR €
HPTT CHF HPTT EUR
Language : English
English Français Deutsch Italiano

Thoughts about Efficiency and Costs

According to Bertrand Piccard, the EnerTwin is an "efficient solution" because it is not only sustainably good for the environment, but also economically beneficial.

Not all gas is the same!

How can Piccard make this statement when the EnerTwin is powered by gas? .... and gas is the devil, at least if you believe certain orthodox opinions.

Today there is not only natural gas in the pipelines of the gas suppliers, which is a fossil fuel and comes to Europe via pipelines from the North Sea or from Russia.

There is also "green gas", which is produced and purified from green waste from agriculture and livestock farming and fed into the gas supplier's pipelines. This biogas has the same quality as natural gas, but comes from renewable resources. The gas suppliers are constantly increasing the proportion of biogas in the gas supply, at least in Switzerland.

The EnerTwin can be operated with biogas and even with up to 24% hydrogen.

Thus, the primary energy used in the EnerTwin is in no way inferior to a woodchip heating system or a solar system.

The overall efficiency of the primary energy used

The EnerTwin generates 18.8 kW of useful energy from 20 kW biogas/hydrogen: 15.6 kWt heat and 3.2kWe electricity. Thus, the efficiency of this condensing turbine technology is 94%. This energy is fully available to a house for heating, heating drinking water and supplying the house with electricity. Day and night, summer and winter.

In our latitudes, a PV system only supplies enough electricity during the day and between May and October (6 months). Thus, the homeowner of a solar system is also dependent on at least one other energy source, electricity from the grid. Usually, the PV system covers about 30-40% of the energy demand of a house and produces a lot of surplus at noon which is fed into the grid  (if the electric car is not in the garage at noon and can be charged).

This means that the efficiency of the energy production of a house with a solar system drops to about 40-50% despite the solar panels.

Conclusion: Efficiency of the primary energy used by a house

Power losses of the system after 20 years:

Solar panels are strongly subject to ageing. Solar cells lose 20% or more of their power over the warranty period of 20 years, after which the power loss goes down even faster. Every year, a homeowner of a solar system is dependent on more electricity from the grid to be able to operate his heat pump or the heating element for hot water.

The EnerTwin does not suffer any significant loss in performance even after 20 years.

Conclusion: Power loss of the system after 20 years:

The above facts are not made transparent by PV system sellers. However, they reduce the contents of the purse over time to a relevant extent.

If you include the loss of power and the ever-increasing consumption of grid electricity in the payback period of a solar system, you get payback periods that are longer at 20 years than at 10 years. These facts may be altered if there are subsidies from governments, like in Germany. There the payback time for an EnerTwin is only 3 - 6 years.

To be fair, it must be mentioned that EnerTwin does not only benefit from the higher electricity price but that the gas price is also a relevant factor to be considered. In recent years, gas prices have fallen, despite the increase in CO2 taxes. At the same time, electricity prices have risen. If this development continues, as experts generally expect, the consideration outlined above looks even better for EnerTwin.

Conclusion: Shortening of the payback period with an electricity price increase of 2 centimes

This means that a PV system with a heat pump is considerably more expensive than the same power obtained from an EnerTwin.

If we fairly take into account the CO2 consumption of the central power generation together with the solar system of the house (because it does not work without grid power), then we can come up with figures like 1 to 2 tonnes of CO2 savings per year. Agreed, these are calculations with many assumptions and therefore difficult to comprehend.

We think that it is nevertheless true that CHP plants like the EnerTwin, which work without grid losses and without the destruction of waste heat, save considerably more CO2 than a solar plant with a heat pump that draws grid electricity at night and during 4-6 months of the year.

We are of the opinion that technologies must be considered in their overall context. This is the only way to assess whether they really bring about a relevant reduction in CO2 emissions. Isolated considerations and almost religious commitments to one primary energy source do not help.

Moreover, these solutions should be affordable for the individual and the community. It should not be the case that countries spend billions on the energy transition but politicians do not think things through to the end. The energy transition does not have to be expensive. 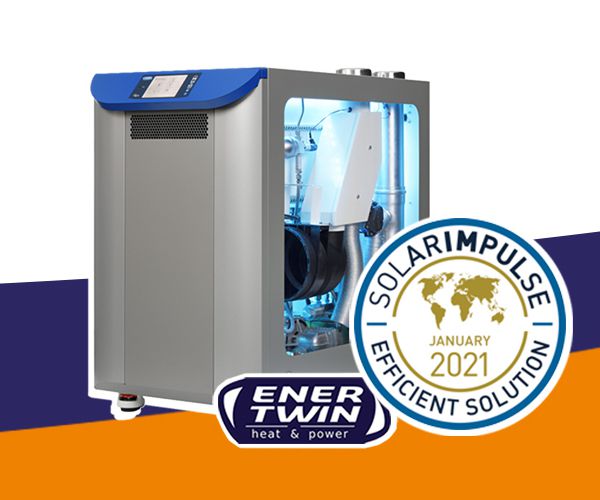 There are solutions, such as EnerTwin, that are both ecological and economical.

So fare the CHP System EnerTwin has been installed in about 200 different buildings in Europe, Amerika and South Africa.